It's been a rough week for the Ward girls, lots of germs floating around these days. (If it gives you any idea, I've spent in three figures on pediatrician visit copays in the last four days alone...)

We'll start with the youngest. Kennedy has had a cold for about a week, runny nose and cough, etc. Recently it became much worse, with her breathing getting labored and wheezy/rattly, and her respiratory rate going up. She sounded like she was panting all the time. So after three pediatrician office visits and several phone consultations, they sent us to the ER, where they tested her for all kinds of horrible things. This was the chest x-ray torture device used to keep her still. 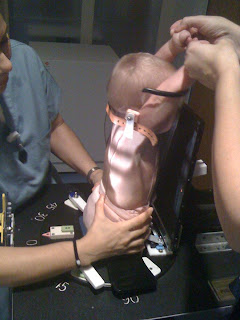 Luckily, she does not have pneumonia or anything else scary. Just a really nasty cold, bronchiolitis, and what we will probably look back on as the precursor to some asthma. Like her sister...

Lela has also been having a rough time of it lately. She had the same cold/bronchitis as Kennedy, but with a much worse cough. She's also had a very high fever since Monday, which rises and falls throughout the day but when it peaks (around 103.8 in the late afternoons) nothing can get rid of it. Her asthma, luckily, didn't flare up but the cough was so bad we've been doing breathing treatments with her too. 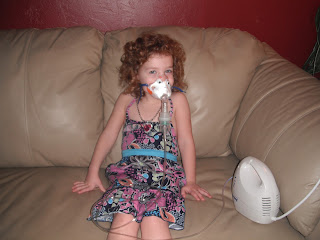 She was still so not-right that I took her back to the ped this morning, to discover that both ears are "impressively infected" (doctor's own words). No wonder she's been in such bad shape. Isn't this just pitiful? 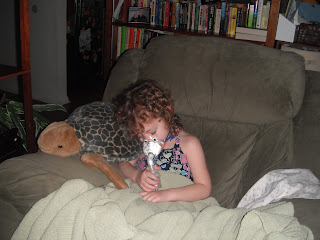 Hopefully the antibiotics will kick in and bring some relief soon. (Although we're already preparing her for the likelihood that she will not get to be an angel in tomorrow's pageant as planned.)

Resli has some congestion and a bit of a cough too, and the ever-present fluid in her ears. However, she does not have a fever (excuse me while I reach for some wood), and seems to be in relatively good shape! 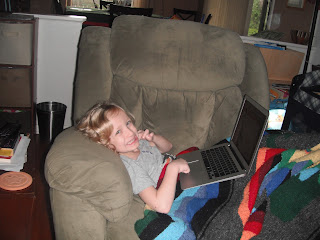 She's a little upset that everyone is getting more attention, but I can't blame her for that. Hopefully she'll stay strong and healthy. I've been calling her Last Sister Standing, which she thinks is amusing.

Harvey is a bit congested and I have a sore throat and a touch of a cough, but we're not complaining (*yet*).

So, dear Santa, please bring us some good health!
Email ThisBlogThis!Share to TwitterShare to FacebookShare to Pinterest

I spoke too soon. Resli has joined the ranks of the temp-way-over-100 club, and feels pretty bad. It looks like there will be no Ward representatives in the pageant tonight. :(

Resli Ann Ward was born at 2:14am on February 8th, 2005. She weighed 5lbs 12oz, and measured 19 inches. The name Resli is a family name - it was her maternal great, great, great grandmother's name.

Kennedy LaGrande Ward joined us on June 16, 2011 at 5:07pm. She weighed 7 lbs, 12 oz, and was 19.75" long. The story behind her name? We were looking for a meaningful name with some Irish/Celtic background, and we can't think of many more inspirational figures to guide her than JFK. The name LaGrande was the middle name of her paternal great-great-grandfather, and is also her father's and grandfather's middle name.